Hello everyone! Heh, i’m so excited i don’t know where to start. 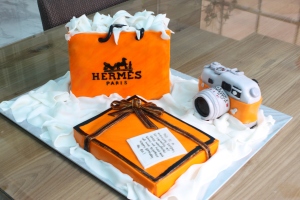 Here’s how it started. Joanne Peh emailed me one night expressing her interest of ordering a cake for David Gan for his birthday! (All thanks to Jaslyn and a few of my readers who recommended me on her blog) Initially the idea was to make him a Hermes Birkin. Boy was i excited! We went into details – the colour, size and everything!

Then i found out from my friends on twitter that David received a Birkin cake during his surprise party that Georgia Lee threw him! Honestly i was really upset about it because i had it all planned. Haha, so i emailed Joanne to inform her. She decided to do something different and chose the Hermes Leica Camera – You guys should go google it! There’s only like 200 pieces in the world, quite cool!

And thereafter.. Joanne was busy and it was hard to communicate with her through email. Bobbi called me to confirm that it was a camera and how many people it was gonna feed. I thought that a camera alone wouldn’t stand out, so i improvised! Under a lot of pressure that is – I want this to turn out well so badly! To be frank, i just started meddling with the cake and fondant, having no idea how the end product would look like! But once i started, the ideas started to flow.

This is a peek into the process! I twitpic-d all these with my phone. Heh. Joanne wanted a chocolate cake. 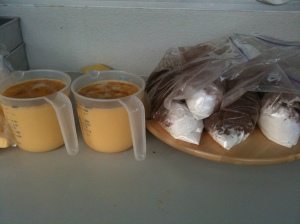 I prepared my wet and dry ingredients. 4 batches! Which ended up to be too much. I didn’t use all the cake! Well, better to overestimate than underestimate 😉

Prepared the butter and the cake pans. 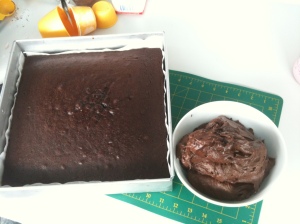 Baked and cooled. Then i made the icing! It’s really good chocolate fudge! Am loving the colours of the cake and icing!

I coloured the fondant, rolled it out, cut them and added the details in. In the picture above, the process took me a good 1.5 hours. Haha! All the detail in the logo was killing me.

Cut the cake, stacked it and frosted it. Assembled the cake!

Did this part of the cake first.

And lastly the camera. This was about 10pm at night already? I started putting the cake together at 830am!

Left the 3 parts of the cake in the fridge. Left the finishing touches in the morning, Joanne was gonna come at about 330pm! Was i psyched 🙂 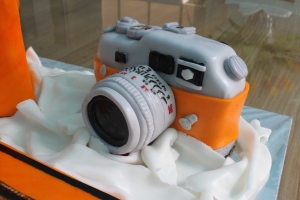 I added the fondant ‘cloth’ all around the cake board.

Tried not to miss out any detail of the camera! Since it’s the centerpiece. 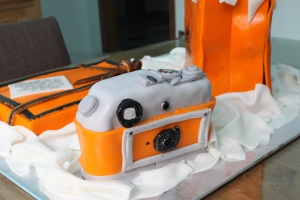 Back view of the cake. 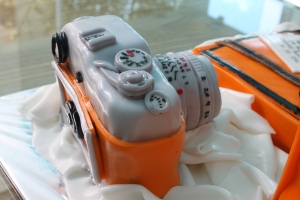 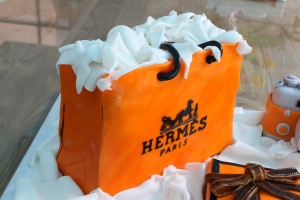 Close up of the gift bag. 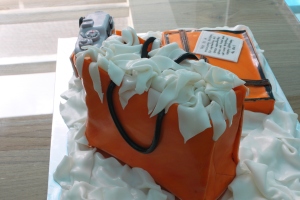 The  gift box with a personalized note from Joanne.

The cake just came together 🙂 I think i outdid myself that day! Hehe. The cake was too tall for the cake box! So i had to improvise – i combined 2 cake boxes together to accommodate the height!

AND THAT MOMENT CAME. JOANNE PEH WALKED INTO MY HOUSE. *FAINTS* Hahaha.

My grandma is the cutest. She was so excited! She loves Joanne on TV shows and couldn’t wait to take a picture – she was even more excited than i was i think! She asked me to print the photo for her. Heh. 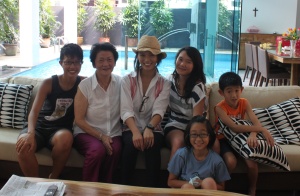 Joanne’s really friendly and really gorgeous! And taller than i expected.

Tah dah! Joanne and me. Hehehe. I was smiling so widely i look like a complete idiot.

Joanne and Bobbi left a while later to the salon to give David a surprise! Heh, i didn’t go of course. Joanne called me after they cut and ate the cake. She gave me some AWESOME COMMENTS. Hahaha, it made my day 🙂

I managed to see pictures on Joanne’s blog. 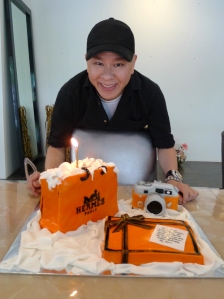 Happy Birthday David! – If you ever see this 🙂 I hope you like it!

So cute, he can’t bear to cut the cake.

And earlier today, David blogged about it too!

Thanks to all my friends for their support and encouragement and to Joanne who gave me this opportunity! Her ONE blogpost gave me so many more viewership today. It’s almost 20,000 hits today! The power of a celebrity.

And it’s crazy, the number of emails and comments FLOODING in. I apologize if i’m taking some time to reply, gimme a while, i’ll reply as soon as i can! Got so many of them and i don’t have much time! Thanks so much for your support guys 🙂

Do note that i don’t sell my cakes for a living, it’s just my passion for cakes and i do it leisurely, i’m still a student! It’s funny and flattering how some of you ask for lessons and even want to apply for jobs! Heh.

Do read Joanne’s blogpost – she wrote really nice things! Am really flattered. And David’s blogpost on the cake – he’s so lucky! So many presents from different people. Will update this post if there are any new pictures to add!